The Brazilian journalist collective “Mídia NINJA” (NINJA media) was founded in 2011. The word NINJA is here an acronym for “Narrativas Independentes, Jornalismo e Ação” (Independent narratives, journalism and action) and a play on the concept of the “ninja”. 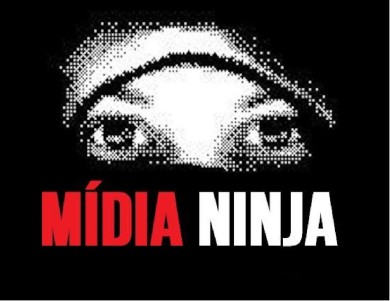 They have established themselves as an alternative media group since their founding, but rose to prominence mainly during the 2013 Brazilian protests. They have also worked on forceful removal of people done by the State, violence against Native Brazilians populations, police brutality among other issues.

To me they are a good example of working alone and together with a great actual impact. The members, called “ninjas”, go to the place they want to document. Sometimes a member goes alone, sometimes with others, but the idea is that they spread and remain in touch with each other, usually by phone – although, many times they lose the direct contact with each other. Each ninja has a camera, frequently hidden, but smartphones are also used. With the assistance of other people around them or other ninjas, they use wi-fi to live-stream the camera contents. Each ninja has a channel and people can watch the recordings live and comment via twitter. The commenters send message of encouragement but also warnings to other ninjas or to other people who are in the area. Warnings such as “do not go to street x, as there are policemen coming”, “the police is throwing gas bombs in street y”, etc. The ninjas, who are working solo, but actually together, have been a major component in protests and social movements around Brazil.  They are spread in several Brazilian cities and having been doing a lot of coverage.

They have started small; however, as the protests became more intense, they started to be known by the mainstream. Their channels and content originating from them are constantly spread in social media. Their ascension provoked mainstream media as people could check that their coverage was not very accurate and, at times, incredibly biased. Their content really made and is still making a major impact in Brazil. They have also given alternative media in general bigger public attention and encouraged more counter-narratives to come forward.

An article on “The Guardian” about the group: