I know, that for many people, this might be something very minor and maybe even everyday kind of thing (if we think about conference calls at our work place for example) but for me, what I’m about to tell, was a big part of my four years away from my family and friends.

We are used to using multiple media platforms at the same time almost like in a well planned synchronized dance. Lets imagine a dinner table. there’s five people: mom, dad and three sisters. But there are couple of things slightly different here because two of the sisters are not actually there, I mean physically, one is in London  and the other is in Turku ( a city in Finland). Well to be honest the third one is not there either. She’s actually concentrating on her Iphone and instant messaging to three of her friends who are also having their dinner somewhere in Helsinki. But how all these people are together then? Well there are two laptops on the table, right where two of the sisters usually sit during family dinner. This is what we did almost once a week during four years and I know there are a lot of people doing it. We used to have even more people joining our dinner party such as friends and boyfriends. Sometimes in physically being around the table sometimes thought one of the laptops.

I find it intriguing how normal it felt. I was usually doing my uni assignments, facebooking, blogging and eating tuna from a can while my family was enjoying a beef sirloin with garlic potatoes but still it felt only natural to keep the line open. Although we where not really having constant discussion and catch up we still enjoyed being “together”. And if we think about a normal dinner discussion it’s not always any more active.

I think that having Skype dinners is actually good and some people should try it even if they are physically close to each other because at the end of the day you have to put an effort to arrange it. You can’t just simply walk to the table and sit down, you have to make sure the internet is working, there is laptop available and there is something or someone to connect you with others. But in the end the best thing about skype dinners, for me, with the family is that you won’t have to clean the table! 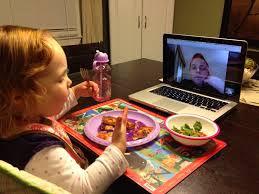 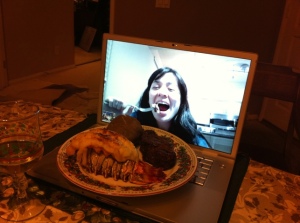